Our second online panel discussion took place on Tuesday 7 July 2020. This time, the topic of our conversation was ‘Anti-Blackness and mental health.’

We heard from two speakers, Furaha Asani (a researcher, teacher and mental health advocate) and Maya McFarlane (the women’s and non-binary officer of the CUSU BME campaign), with discussion chaired by the writer, activist and playwright Aude Konan.

Aude began proceedings with a poll that revealed a high proportion (89%) of our online audience identifying personal experience of mental health issues. In the discussion that followed, all three speakers unpicked the relations between mental health and anti-Blackness, racism and inequality more broadly. This involved two key topics of debate.

The first was the potential for educational spaces to be traumatic and violent for Black students. Maya relayed her experiences studying at Cambridge University, where she noted that support for Black students was often limited to signposting Black students to other Black students and staff for support. Instead, Furaha argued that universities need to take the lead in addressing the ugliness of racism—including examining their own histories as institutions that have benefitted from racism in the past and present. If universities are to position themselves as sanctuaries of justice and equality, then they need to practice what they preach.

The second topic discussed was the forms of disadvantage within the category of Blackness. Furaha noted the topic of colourism, whilst Aude focused on the differential vulnerabilities experienced by different categories of migrants—something that has been starkly brought into view following the Windrush Scandal. Maya drew this point out with reference to the caricature of the ‘strong Black woman’—specifically the damaging notion that the role of Black women is to shoulder pain for the greater good. Such a caricature is not only inherently racist and sexist: it also has implications for how (and if) Black women seek and receive support with their mental health.

In drawing these two topics together, Aude noted the need for a feminist point of view that takes into account the intersecting disadvantages faced by Black people. To address these systemic disadvantages takes real action in the present. Given anti-Blackness is a global phenomenon, it requires a global solution—now. 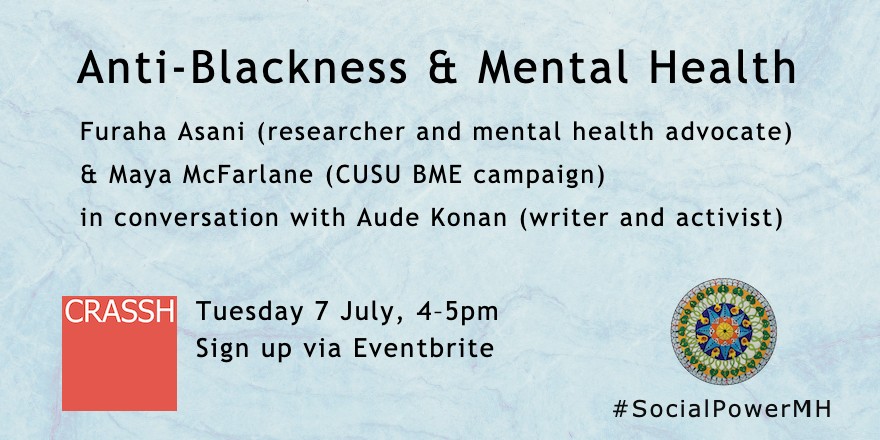